The closing of the river Schelde, which links Antwerp with the North Sea, after the Belgian uprising in 1830, had also closed Belgium to the world. Thr Treaty of Vienna in 1939, signed by Belgium & Holland, Great Britain, France, Prussia, Austria and Russia guaranteed not only Belgium’s neutrality but also free navigation from the North Sea to Antwerp. This had not happened for some 300 years. The early 1880s saw the building of a dry dock as trade burgeoned. In January 1884, at the urging of shipbuilders and industrialists from Antwerp, a committee was formed to organise a commercial, maritime. industrial and artistic exhibition. The government agreed, which led to the1985 exhibition running from 2 May to 2 November.

The cost was 4 million francs and recorded 3.5 million visitors. A basin served for the maritime section, while 3 halls and part of a railway station housed the machines. There were 14,472 exhibitors of whom 3,411 were Belgian. France also made up a third of the total numbers.

One of the major attractions was a display of mechanical and electrical traction, which featured all the types of motor vehicles existing then. Also long distance telephone communications between Brussels and Antwerp allowed a local group to hear a concert given in Brussels, which is some 50 km distant.

While no special stamps or cachets were used, a series of medals was struck and awarded for good displays. 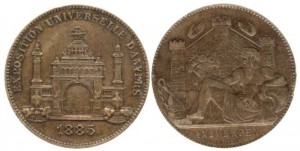 A bronze medal awarded at the 1885 Antwerp Exhibition

Belgium had dipped her toe into the water with a successful exhibition. However, it was to be another 9 years until the next exhibition in Antwerp. This was followed three years later by the first exhibition in Brussels. The great era of international trade fairs had begun.