Already in 1891 some of the contributors to the 1885 Antwerp Exhibition had thought had thought of a second exhibition there. They wanted it to follow the 1893 Chicago one, so that the European exhibitors on returning to Europe would be able to show off their wares on the Continent, as well as celebrating the continuous expansion of the maritime facilities in Antwerp.

26 nations with 12,095 exhibitors attracted some 3 million visitors for a financ ial break even result.

The John Cockerill Society showed models of boats plying the river Congo along with statues representing natives transporting pieces of a cannon and a modular boat. Drawings by native children were also shown. A Congolese artist had engraved an ivory plate with the signatures of the delegates of the 17 nations, who had signed the antislavery treaty in Brussels on 2 July 1890. This had been convened by King Leopold II.

The most striking architectural exhibit was a faithful recreation of an old Antwerp neighbourhood using furnishings etc and 15th century costumes for the workers therein. At 10 pm each night a curfew was sounded by trumpets and drums as festivities stopped. The success of this was such that all Belgian Exhibitions held thereafter had such an exhibit, including the last in 1958.

Letter from Antwerp to Canada

Letter from envelope on previous page
complaining that he had not received the stamps in reply for which he had paid with 50 Belgian stamps earlier. If Chas Henry was not going to send him the stamps requested, would he please return the Belgian stamps.

Anvers cds of 25 Aug 1894
Bern arrival cds of 26 Aug
Card only took some 36 hrs, which would undoubtedly better today’s time.

10c was the correct postage abroad

Postcard to Kadina in South Australia

Cancel made up of 2 parts: postmark that contains name of post office and date of mailing; plus another cancel that prevents reuse of stamp or card. 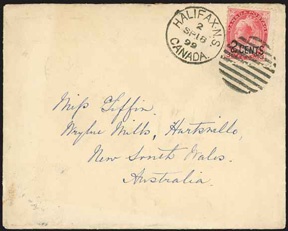 An envelope is a packaging product, usually made of flat, planar material such as paper or cardboard, and designed to contain a flat object, which in a postal-service context is usually a letter, card or bills.  The traditional type is made from a sheet of paper cut to one of three shapes: the rhombus (also referred to as a lozenge or diamond), the short-arm cross, and the kite.  These designs ensure that in the course of envelope manufacture when the sides of the sheet are folded about a delineated central rectangular area, a rectangular-faced, usually oblong, enclosure is formed with an arrangement of four flaps on the reverse side, which, by virtue of the shapes of sheet traditionally used, is inevitably symmetrical. 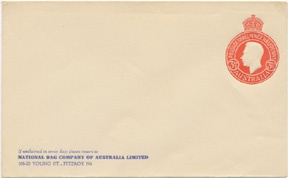 Not separated by rows of perforations.  Separation is the means by which individual stamps are made easily detachable from each other.

In the early years, from 1840 to the 1850s, all stamps were imperforate, and had to be cut from the sheet with scissors or knife.  This was time-consuming and error-prone (as mangled stamps of the era attest).  Once reliable separation equipment became available, nations switched rapidly.  Imperforate stamps have been issued occasionally since then, either because separation equipment was temporarily unavailable (in newborn nations for instance), or to makers of automatic stamp vending equipment (the United States did this in the 1900s and 1910s), as novelties for stamp collectors (particularly when stamps are issued in souvenir sheets), or as errors. 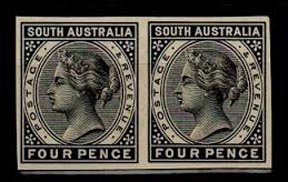 A Postcard or post card is a rectangular piece of thick paper or thin cardboard intended for writing and mailing without an Envelope and at a lower rate than a letter.  Stamp collectors distinguish between postcards (which require a stamp) and postal cards (which have the postage pre-printed on them).  While a postcard is usually printed by a private company, individual or organization, a postal card is issued by the relevant postal authority. 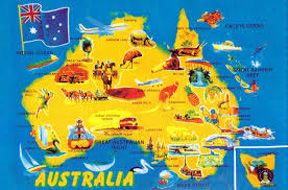